North of Salta, Argentina lies Quebrada de las Conchas. “Quebrada” from “quebrar” (to break) refers to a gorge, in this case mounds of rust-colored rock, broken at sharp angles by millions of years of erosion. “Conchas” are the shells, or marine fossils, left on the ocean floor before the gorge was elevated, along with the rest of the Andean range, by the friction of tectonic plates.

It only rains in the gorge about five days a year, including the day we visited. I don’t know how it would have looked if it hadn’t, but I was happy not to have the lines of exotic rock columns and sky blurred by sunlight. The sprinkling rain darkened the scattered shrubs, making the whole place look positively fertile. 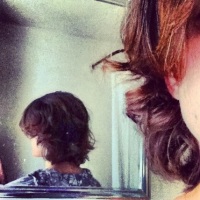