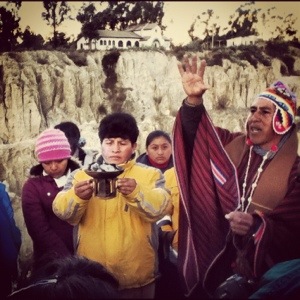 We set off at 5:30am. Dawn wouldn’t reach Valle de la Luna, just outside La Paz, until at least 7:00. Among that valley of oddly-eroded mud columns and crevices, people were gathering to celebrate the Aymara New Year.

The rituals and offerings which take place at the winter solstice are meant to ensure good fortune in the coming agricultural year. Not only has the legitimacy of the Aymara New Year been called into question, but the holiday, only made official in 2010, is still controversial. That morning, as we walked along the road from our volunteer accommodation in Jupapina, fighting off stray dogs and sleepiness, we had no idea about the history of this holiday. All we had to go on were rumors of llama sacrifice and a flyer that told us there’d be live music and dancing.

As we neared the Valle de la Luna, electronic music blasted from a speaker. We joined the line of people, bundled in warm clothes, slowly filing through the subterranean entrance. Lit by oil lamps made from recycled cans and tins, we walked under a grey dawn sky, along the narrow path between sandy-stone formations and on wooden walkways. Ahead, the landscape opened into a flat area, oddly illuminated with green floodlights, where a group of people huddled close to a fire.

On that small promontory of land it was hard to know where to give my attention. In a concrete pit a woman was chanting, wrapping something in a brightly-colored cloth. Musicians wearing turquoise ponchos and woolen hats played pan pipes and stamped their feet in rhythm. Further away from the fire a man sprinkled ‘alcohol de caiman’ over coca leaves and pastel-colored charms that looked like Love Heart sweets.

Teenagers snapped photos on camera phones and whispered amongst themselves. A Scandinavian-looking couple enjoyed the advantage of their height and swept their heavy SLR lenses above the crowd. Old women, clad in several layers of conflicting wooly patterns, pushed their way to the front for a better view, some having even brought stools with them. A few officials, with the La Paz logo emblazoned on their warm jackets, stood on the outskirts making sure no-one got too close to the edge.

Our group had dispersed into the throng. The South Africans were up on a slight ridge; FC with his eyes closed taking in all the sounds while Dirk watched some drummers who circled through the crowds. Rachel and Maggie held their hands out to the fire where the cloth-covered bundle now burned. Regan and the kids laughed about something. Paige was chatting to one of the pipers before being whisked away by a short-haired, yellow-coated woman to dance with the drummers.

“You know everyone,” I whispered afterward.

“It’s what happens when you’re here five months,” she replied. “That woman’s the mayor of Mallasa.”

I looked over at Rolando, who I knew had previously been mayor. He was posing for a photo with his wife Emma, while their kids still laughed with Regan. A mixed Bolivian-British family, they have deep connections with their local community and set up an organisation, Up Close Bolivia, to help connect willing and knowledgable volunteers with projects in the villages of Mallasa and Jupapina.

When we first arrived, we were welcomed with open arms into their home. Since then we’ve been welcomed into their community through both their efforts as hosts and our own efforts in the projects we’ve been doing. We’ve visited the nursery set up and run by local mothers. We’ve created and taught English classes for children and adults. We’ve eaten almuerzo in local restaurants and bought our groceries from the little tiendas in the village. We’ve hiked up the Muela del Diablo, cooked together over a bonfire and traded our stories with each other. Although volunteers are always coming and going, Up Close Bolivia has succeeded in making an international family here in the Andes. It’s almost become a cliche at leaving dinner speeches, when everyone mentions the extraordinary sense of community they’ve felt being here. 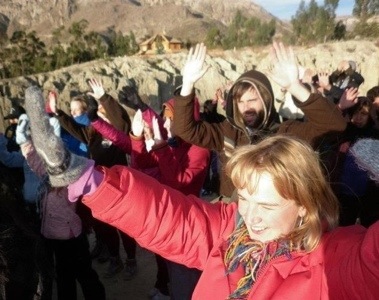 Someone tells us that we should raise our hands ready for the first rays of sun, but being in a valley is deceptive and we wait in shadow a little longer. When finally the sun peeks over the mountain, there’s a collective cheer and someone leads the crowd in an Aymaran chant.

Then it’s all over. The musicians start packing up and people wander towards the exit. I warm myself at the fire which has died down a lot. Amongst the charred bundle I see tiny bones – was this the llama sacrifice? The woman who’d performed this ritual was sitting on a wall, talking to an old man, both of them in costume. A friend of theirs approaches and they greet each other happily. They take a few pictures together then say goodbye.

On the way out I stop to watch a live band which mixes electric guitar and drums with traditional Andean percussion and a couple of charangos (a lute-style instrument popular in Bolivia). The lead singer has an inexplicably deep voice for such a young person. His singing is interspersed with crazy laughs and whoops, and the crowd laughs back as they trail out and buy api and salteñas to give them fuel for the journey home. 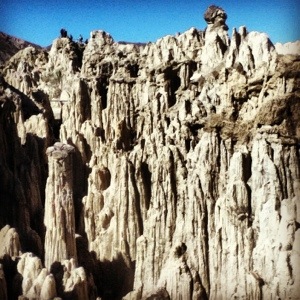