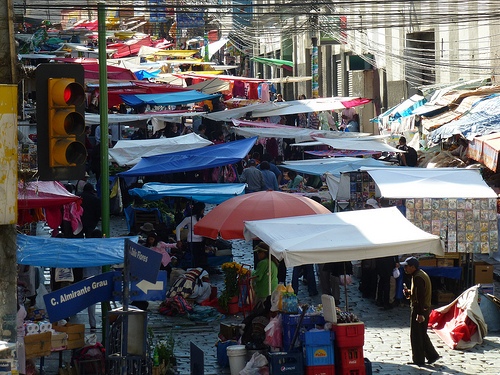 Vast, winding and sloping, Mercado Rodriguez is a network of cobblestone streets where everyday items such as vegetables, spices, meat, kitchen utensils, clothes and toys can be found. There’s also quite a nice collection of health food shops, selling whole wheat bread, herbal supplements, quinoa powders, cereals and so on.

This is a real market, not a phony witches market for tourists, so keep in mind that vendors may not appreciate you getting in their face with your giant camera. Still, it’s a great place for a stroll, and a good opportunity to see the kind of things normal Bolivians buy and sell. People are usually friendly if you treat them with respect, so don’t be that gringo who haggles aggressively over every penny. Everything is cheap as it is, and in my experience, I’ve never been ripped off.

Opening hours The streets are closed off to cars on Saturdays and Sundays, and the market is busiest on Saturdays around mid-day. Don’t bother coming super early, as La Paz is cold in the morning and it doesn’t really get going until at least 9.