Well, it’s actually 329 pages if we don’t include the glossary or index. 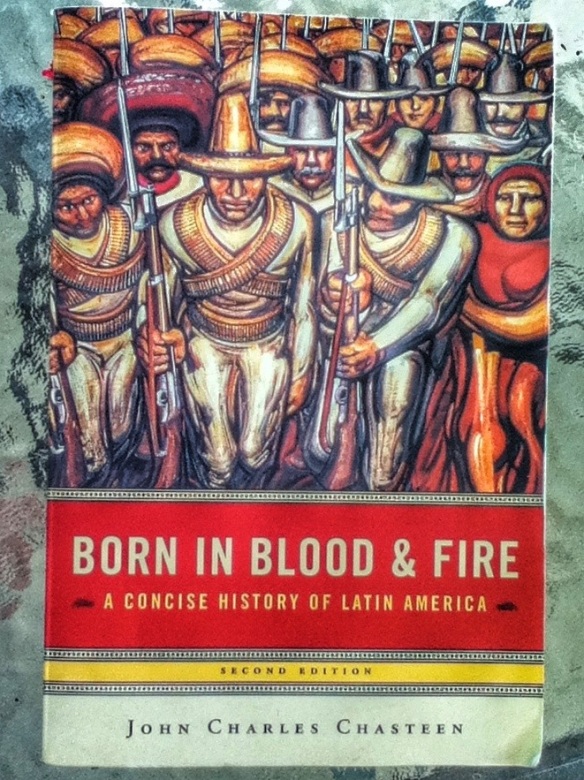 Despite the page count, this book does manage to cover both Central and South America. A sort of Latin American History for Dummies (amongst which I count myself).

I love history. But I’m not so into anything modern, and by that I mean post-Encounter (or as we in Europe tend to think of it as, the Conquest i.e. when all those explorers/treasure hunters sailed off to the New World). This book fills in everything that came after. Which is a lot.

It does this by focusing on three main countries (Mexico, Peru and Brazil), with forays into other places used as further examples or when they deviate from the threads of the story. Of course, there are parts which are skimmed over or mentioned only in passing. But on the whole the book does a good job of showing how the region as a whole developed, as well as giving insight into very specific events and people.

I like this book because it’s very readable – you can fly through a chapter in twenty minutes. At the end of each chapter, there’s a ‘countercurrents’ section which looks in more detail at some aspect that doesn’t quite fit the zeitgeist of the era or that offers a different perspective. So in the Nationalism chapter it takes a look at new immigration, Independence is paired with The Gaze of Outsiders. The book also weaves in lesser-known figures – such as nineteenth century Argentinian journalist Juana Manuela Gorriti, or Paulo Freire who, in the 1960s, worked with impoverished populations by developing a new way to teach literacy to adults.

There is a lot of politics and economics, but it’s always brought back to the impact on the general population. In fact, the explanations have helped me to understand some economic terms that I didn’t really understand before. This has given me a better understanding of broad patterns of history as well as the current situation of Latin America today.

The one thing that could have been better are the illustrations. Visual culture is hugely important for understanding and images can give us new ways to think about things in addition to making learning easier. It may be an under-grad textbook, but I’d still prefer more pictures.

But I guess that would be asking too much of only 372 pages.