I found out about Agua Blanca when searching information about Puerto Lopes where we wanted to go whale watching. Described in some sources as a ‘commune’, in others as a ‘private community’, Agua Blanca has an archaeological site, small museum and a natural sulphur pool. I couldn’t really ask for more! 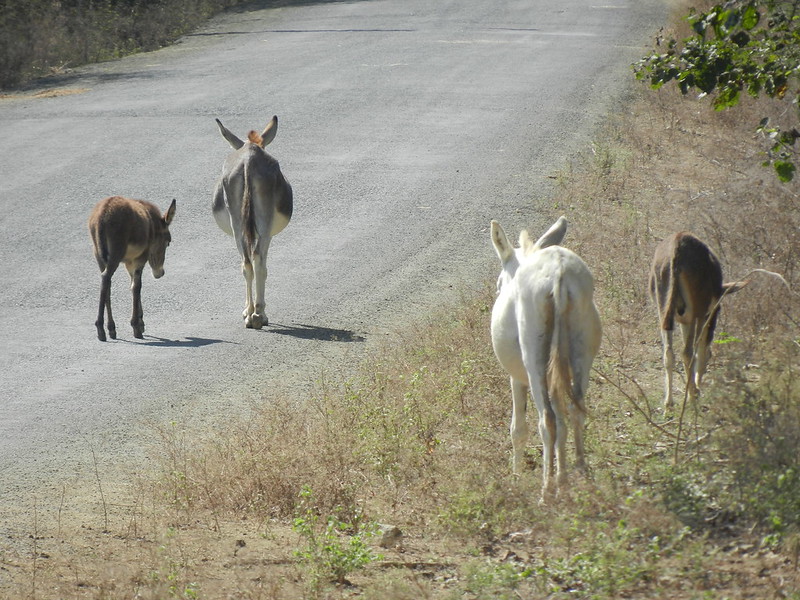 From the entrance off the main road, the village itself is another 5km. You can walk along the dusty path through tropical dry forest, or get your mototaxi to take you all the way to the village. 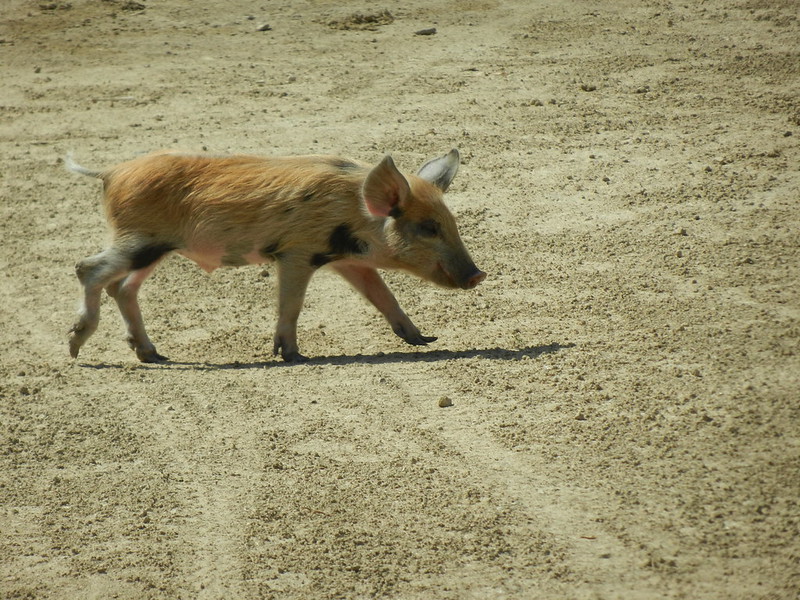 You’ll find yourself at the museum where you pay your entrance fee. The museum shows artefacts from the Manteña culture (800 to 1532 AD) as well as specimens of local flora and fauna. 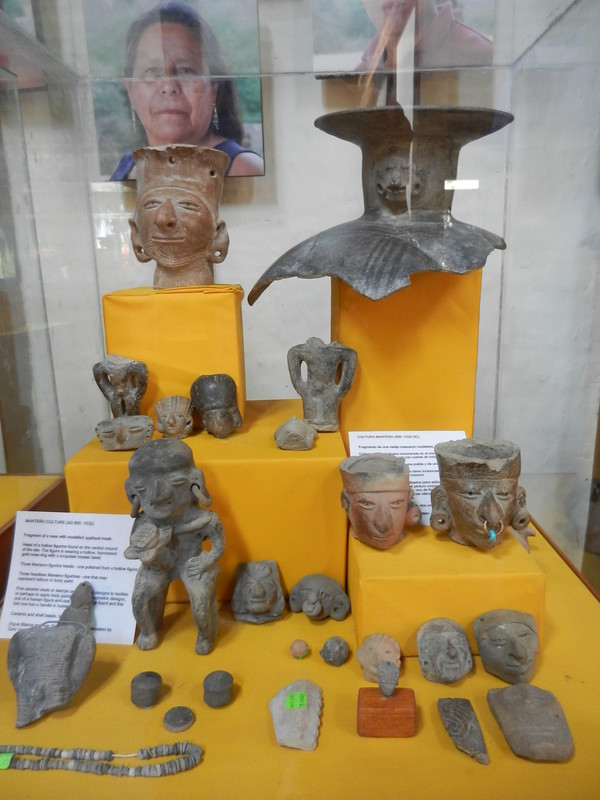 Local guides (our lovely young man was called Stalin!) will show you around the exhibits and then lead you on a walk around the village to see more of the archaeological sites as well as pointing out interesting animals and plants. You could walk around by yourself, but without the guides’ explanations and sharp eyes, I think you’d miss out on a lot (such as the sleepy owl below). 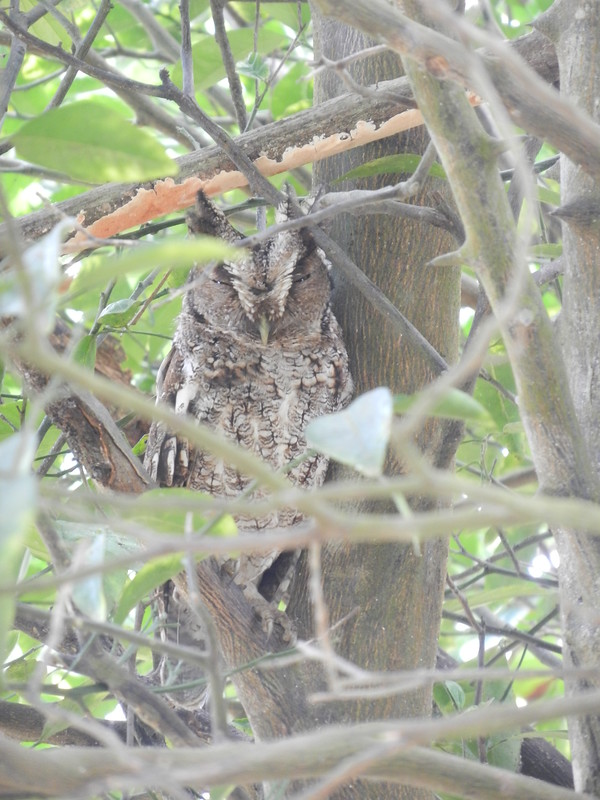 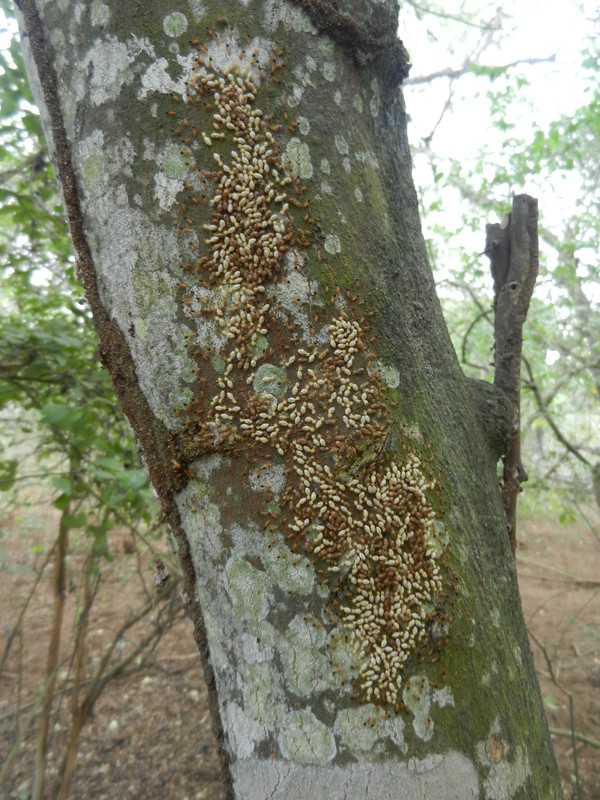 These special termites make their nests in trees and build ‘covered’ pathways to protect themselves as they travel around. 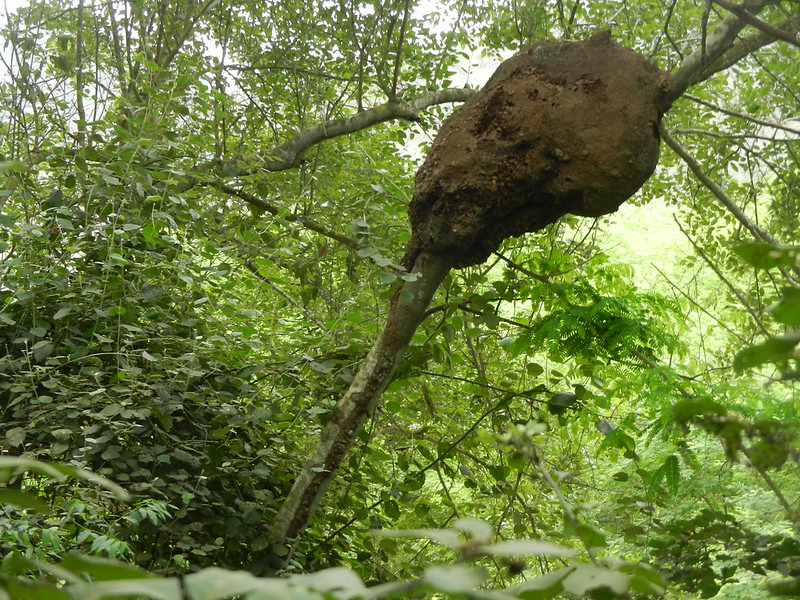 The surrounding land is natural tropical dry forest, but some is also used for agriculture. 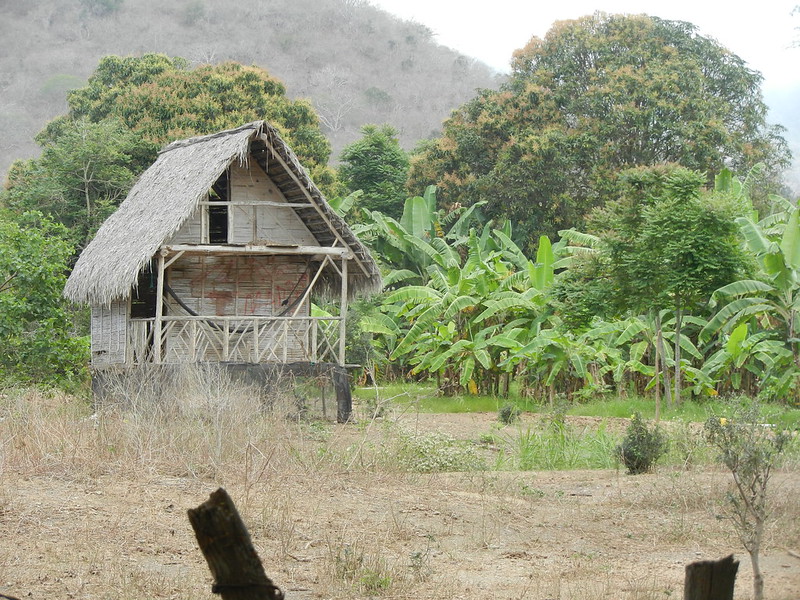 Whilst the little micro-climate here was really hot and dry, we could see the rainclouds over in Puerto Lopes. 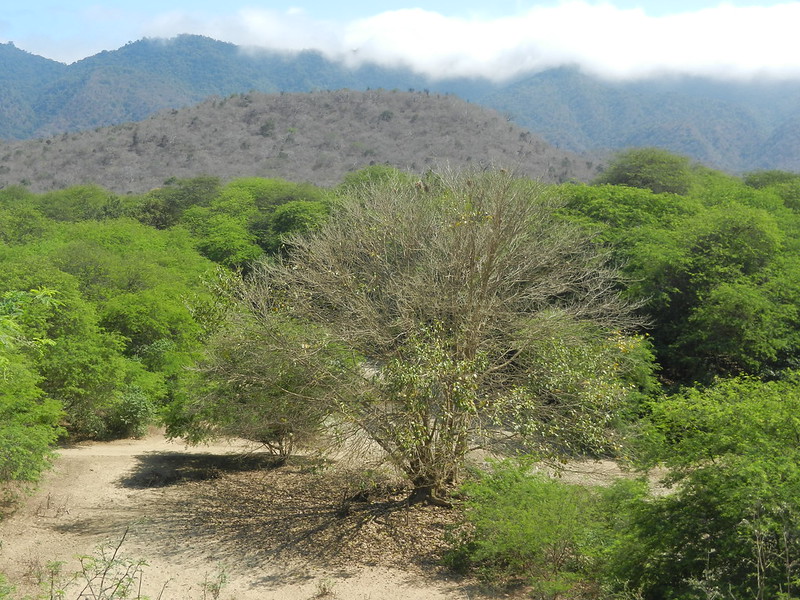 After an easy stroll through the village and up to a viewpoint, we ended up at the natural sulphur lagoon. It actually didn’t smell bad at all and was a fun way to cool off. 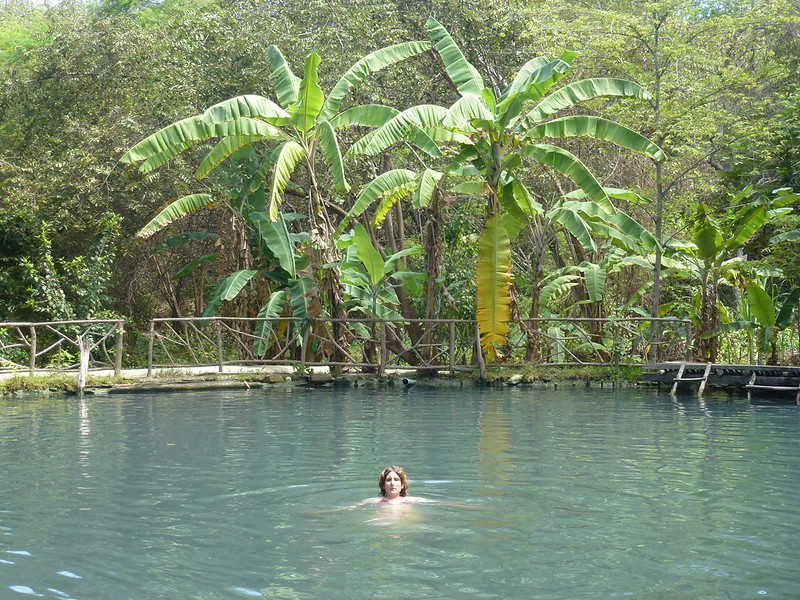 The murky water is full of rich sediments which are periodically dredged from the bottom and set out for visitors to use as a natural cleansing skin mask. 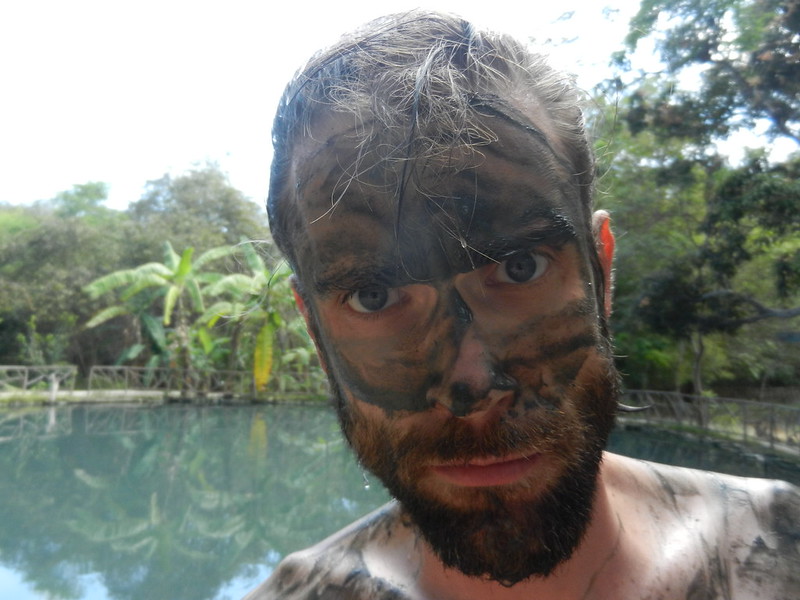 After applying, drying and then basking in the pool, you can take a shower with fresh water in the changing rooms built alongside the lagoon.

Agua Blanca was definitely worth the trip and it’s nice to know that the $5 entrance fee goes directly to support the community.

A mototaxi from Puerto Lopes cost us $6. On the way back we decided to walk to the entrance at the main road and hope to pick up something cheaper. As luck would have it, a villager was driving by and offered us a ride all the way back for just $2!

Have you ever visited a commune or other form of private community? As a tourist, what did you think of it?

You may have already heard about Up Close Bolivia, where we had an amazing time volunteer teaching English classes. Today I wanted to let you know about their sister organisation, Colibri Camping.

Staying in the village of Jupapina, shopping at the little stores and eating in local restaurants was one of the best things about our time with Up Close Bolivia. We felt completely at home in this friendly community. Not to mention the gorgeous scenery! The camp site was still being built when we were there, and now that it’s finished I wish we could go back to experience it. You can use your own tent, rent equipment from them, or even stay in a teepee or A-frame cabin!

If you’re looking for somewhere a little different, somewhere you can feel part of a community and not just a traveler, I can absolutely recommend Colibri Camping.

And don’t forget to say a big hello from me when you get there!

During our trip to Puno, Peru to visit the Bolivian consul we had a few days spare to explore. From our hostel we took a 2 day, 1 night tour of the islands on the Peruvian side of the lake. Following a short stop at the Uros floating islands, we cruised to Amantaní where we stayed the night with a host family. After hiking to one of the island’s peaks, we attended a party thrown by the villagers. The next morning we left for Taquile. Another hike and lunch, then we took the boat back to Puno.

The tour seemed to be standard as we were grouped with people from different hostels and hotels and we kept bumping into the other groups everywhere we went. And there were a lot of groups! Yes, it was very touristy; the local islanders dressed up in traditional costume, we were given the hard sell everywhere and children sang ‘twinkle twinkle lechuga’ in an attempt to get our small change!

But, despite concerns about the commodification of culture, it was more educating and gave more chances to interact with locals than if we had just stayed in a hotel (of which there aren’t any on the islands). It did feel rather ‘false’ that there was a party for guests every night (or at least the two or three nights a week our host has tourists stay). But staying in a real house, watching Maria Fernanda cook over a fire, wandering around in the electricity-less night, it was an experience that I think was beneficial, and certainly very enjoyable, to us tourists. The next day on Taquile our guide explained how all the restaurants take turns to serve groups so the proceeds of tourism are spread evenly throughout the community (and judging from the amount of solar panels I saw, the proceeds must be quite sizable).

It’s certainly not a perfect model for ethnic tourism, but I have seen worse.

We visited three wineries in Argentina (two in Mendoza, one in Cafayate) and one in Chile (near Santiago). The experience at each one was quite similar; a tour of the processing area and/or wine cellars and vineyards, then a tasting of a few wines followed, of course, by a trip to the gift shop (compare them to the bodegas we visited in Bolivia).

Some varieties of grapes had already been harvested when we visited Mendoza at the end of March.

Our tour left at 2pm and included transport and a guide, with visits to two different wineries and an olive oil factory (as well as English-speaking guides at each location).

Bodega Dante Robino is fairly big, producing reds and whites for national and international consumption. As we were shown around, we were told how they make use of various technological processes to speed up production and increase yield. We got to try two reds and a sparkling white (which was too champagne-like for my tastes). There wasn’t that much explanation about the wines themselves and the whole tour was a little impersonal.

When we reached Bodega Cavas de Don Arturo, it was a totally different story. The guide here was well-trained and knew just how to draw us in with anecdotes about Don Arturo and his family. Processing and production are done as naturally as possible, without the use of chemicals. It may have been my imagination, but the wines we tasted here really did seem better for it (and apparently it’s the chemicals that cause a hangover, not the alcohol…hmm…). We were given four different kinds, with a full explanation of each, as well as a ‘how to’ of wine tasting. This was easily my favourite winery.

Whilst on a tour of Quebrada de las Conchas, we didn’t realise that we were going to stop in at a winery in Cafayate.

Like Mendoza, the region is very dry and needs complex irrigation systems for the vines. This area is especially well-known for Torrontés (a white grape variety). As whites go, it wasn’t bad but I still preferred the reds.

The bodega we visited is similar in size to Don Arturo’s, although it was more of just a tasting experience than a full-blown tour (they have a nice looking lunch menu, although we had to eat elsewhere).

In Santiago we decided to skip the tour group and go ourselves to the Concha y Toro winery (but we still, understandably, had to join a tour once we arrived). The grounds of the Concha y Toro estate are really beautiful…and big! Depending on how you count – acres of vines or gallons produced – it’s the second or third biggest in the world (the other two are E&J Gallo and Fosters).

Concha y Toro produces the Casillero del Diablo line of wines (which happens to be the only decent wine we could find in 7-11 in Taiwan). We were taken into the ‘Devil’s cellar’ and left in the dark while a dramatic voice explained the legend behind the name. I won’t spoil it by telling you.