We thought we had inadvertently planned our trip so that we missed carnaval in every city. We were pleasantly surprised then by this minor madness outside our hostel in Boedo, a not-so-touristy neighborhood of Buenos Aires.

There’s a war going on in the Boedo neighborhood of Buenos Aires.

While crowds cluster along the roadside and yellow-vested security patrol the metal barriers keeping the road clear. While stall owners grill chorizo and hamburgers on huge barbecues. While the supermarket wraps plastic around its shelves of alcohol and hangs up a sign prohibiting sales from 18:00 to 11:00.

While drums resound and cymbals clang. While flags wave and sequined satin sparkles. While painted faces chant and sing and dancers four-step, high kick and bop their way along the street.

While a figure in a Scream mask and another in a kufiya weave in and out of the paraders and two men dressed as Jews entertain the crowds from a central stage. While a baby suckles from its dancing mother’s breast. While the faces of Che, Bob Marley and Homer Simpson smile from the costumes of performers.

While Carnaval Porteño 2012 is celebrated in Boedo the war happens on the sidelines.

It starts with a few young children chasing each other with cans of soapy foam spray. Toddlers play with the foam on the pavement. Then come young teenagers, boys and girls divided into different war bands. Roaming, flirting, spraying and running. Once someone’s hit they become a target, the tell-tale white foam on their clothes draws more shots.

As the evening progresses, the attacks become bolder. No longer a sneaky behind-the-back spray, but a shot straight to the eyes or mouth. The rules of leaving alone those younger or older than you start to be broken. There are indiscriminate attacks into the crowd. Passers-by become casualties of war, but no-one can be angry during Carnaval.

Empty cans litter the floor like shrapnel and people hurry through the damp gauntlet as they move along the outskirts of the crowds watching the parades. Stacks of cans are still for sale. Grown men buy them and hold the canisters ready, fingers poised for a lightning shot. Old women shout their way through. The pavement runs white with foam.

But it’s barely eleven o’clock and the parades aren’t going to finish any time soon. There are still people who are dry, not covered in soapy suds. The war isn’t over yet. 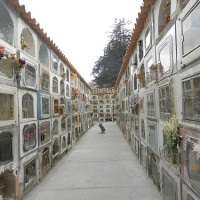