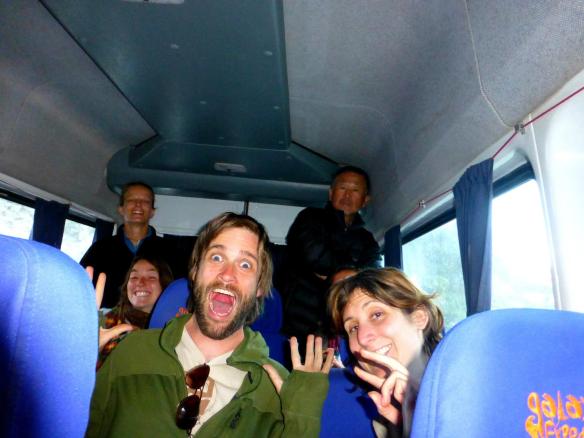 This is us. I thought the photo was taken by Melanie, but I can see her sitting behind us on the left. This is how crazy we have become after six hours of waiting in this minibus. It’s the fourth day of the Santa Cruz trek. We actually finished the trek yesterday evening because our guide kept us going for eight hours until we reached an hospedaje in Vaqueria instead of stopping earlier to camp at that nice spot by the river. The group of twelve (plus guide, porter and cook) is one of the best we’ve ever had the pleasure to tour with.

So what went wrong?

When we got to Huaraz, we really had no idea about the area and decided on a whim to do a three day trek to the archaeological site of Chavín de Huántar. Problem was, every agency we asked just said ‘no’ and that was it. No alternatives. No suggestions. Just flat out refusal. By the time we found a place called Peru Diamond, I was ready to hand over the cash simply because they were the only ones to even act like they wanted to make money.

Instead they suggested we do the Santa Cruz trek because the scenery was better. It was also cheaper because they already had a group going. We agreed. We went. It was absolutely beautiful.

On that last day, after hiking an hour uphill and waiting for the bus on a hot, dusty road for two hours, we were looking forward to spending time at the turqoise-coloured Laguna Llanganuco. We saw it from a distance, at the high pass between Yanapaccha and Chopicalqui. We drove down the winding road, getting closer and closer until it was finally out of view. And then we stopped. We stopped at the entrance to the trail leading up to Laguna 69. We didn’t know why. Finally the driver said we were waiting to pick up more people.

After a couple of hours we were getting antsy. The driver wouldn’t give any more information, probably because he didn’t have any. We realised that although we’d all booked through different agencies, we’d been combined into one group that was being led by Galaxia Expeditions (which is one of the cheapest and least reputable in Huaraz).

We waited some more.

We ate the last of our food (which wasn’t much as we’d binged the day before, thinking we’d be back by mid afternoon). We ran out to the ‘toilet’ in the bushes one at a time when no other vehicles were about. We discussed bee-keeping and how to use snow instead of toilet paper (something we luckily didn’t need to test out). We decided to share all our photos on Dropbox. We lamented that Laguna Llanganuco was so close, yet we were likely not to see it until it was too dark to appreciate it. As temperatures began dropping and shadows crept across the valley, we told the driver to get back in the bus and wait with us but, fearing the wrath of a group of gringos, he refused.

Eventually we began to see poor people struggling their way along the path, suffering from altitude sickness, as they returned from Laguna 69. We tried to guess if they were the people we were waiting for. We counted how long it took them to turn round the bend before they went out of sight and then guessed how long it would take until they came into view again. We waited until everyone had been picked up by their transport and driven away. Our people were the last. We’d started calling them ‘our people’ because by this point we just felt sorry for them. They must have struggled terribly if they were this slow.

And we started back towards Huaraz in the dark, tired and more than relieved that we didn’t end up spending the night out here. When they realised we’d been waiting for hours, they were apologetic and embarassed (they also spoke English very well and could tell we were really fed up even if we said we weren’t). But it wasn’t their fault. It wasn’t anybody’s fault. It was just really bad organisation on the part of the tour agencies. It was something that isn’t that surprising in this part of the world.

So instead, we arrived back in Huaraz in the middle of Peru’s Independence celebrations and said our hurried goodbyes. Some of us ran to get an overnight bus to Lima. Others went straight for food. Jon and I rushed to find a room in a hostel and the first thing I did was to take a hot shower. It probably would have felt just as good six hours earlier, but I like to think the extra wait made it even better.