Most backpackers we ran into told us they couldn’t wait to get out of Lima. True, it is sprawling and perpetually covered in a grey haze. But it also has a park full of cats, a pretty efficient transportation system, colorful street art, chaotic markets and one of the best Chinatowns in South America.

Where? The bus from Ica to Lima. It probably happens on the reverse route, too. But it could happen anywhere.

What happened? When we got on the bus, I put my bag on the floor at my feet. This bag contained my most valuable items. The bag I could afford to lose was stored under the bus. After picking up some more passengers outside the station, a chubby round-faced man with a buzz cut tapped me on the shoulder.

“Water,” he pointed on the floor where my bag was.

“Water,” he touched the water with his finger and then touched my hand with the same finger as if I was an idiot.

I checked my bag to see if something was leaking, but nothing was coming out of it.

“Water,” he repeated and placed my bag on the storage above our seats.

I thought maybe he was just looking out for me, but it didn’t feel right. A couple minutes later, I decided to take my bag down and put it on my lap. When I looked for it, it wasn’t above me, but had slid down towards the center of the bus. Or so I thought. It turns out the thief had moved it closer to the exit. I kept the bag on my lap for the rest of the trip.

Later, when I got to Lima I overheard a Swedish guy who was talking about having had his bag stolen. I asked him what happened and the set-up was exactly the same. The thieves got on the bus at a stop on the street and only traveled a short distance. By the time he realized what had happened it was too late. It was the same route, but a different bus company. He lost his passport, camera and personal journal, among other items.

How to avoid this?

This is pretty easy. Just keep your bag on your lap. Don’t let anyone who doesn’t work for the bus touch your bag, and even then, make sure you have an eye on it at all times. If you’re really paranoid, go with a more expensive bus line like Cruz del Sur. They have very high security and don’t pick up passengers outside the station. 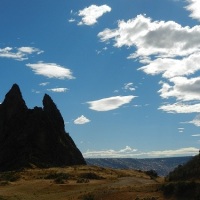